Let’s start with the disclaimers because they’re important and influence the results. 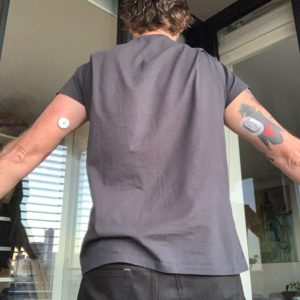 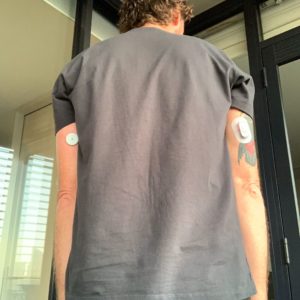 I’ve been wearing the Freestyle Libre CGM for several years and I am a big fan.  It’s improved my HbA1c significantly (7.9 to 6.7). So the Dexcom G6 always had an uphill battle in this n=1 clinical trial. I’d heard great things about the G6.  Specifically that it was more accurate, so I was intrigued and hopeful.

Dexcom is a Continuous Glucose Monitor made by “Dexcom” – founded in 1999 and gaining FDA approval in 2006.  The Dexcom helps to make better treatment decisions by placing a small filament under the skin that reads the glucose levels in the interstitial fluid of skin.

The filament data is communicated via a transmitter helping to reduce finger pricks. The G6 version doesn’t require finger pricks, reducing the need for calibration. This was authorised by the FDA March 27th, 2018. This factory calibration has been closely reviewed to ensure safety and efficacy. Dexcom is one of the more expensive CGM’s on the market at $3,828 USD per year and lasts 10 days.

How does Dexcom work

Dexcom works by inserting a filament in the skin to interpret glucose levels, avoiding finger pricks. Dexcom has been shown to reduce hemoglobin A1c (HbA1c) for people using multiple daily injections. It does this by providing more information to the patient enabling better informed decision making about blood glucose management.

How accurate is it

There is substantial data published in clinical trials showing that the Dexcom is highly accurate, for example one particular study showed that the G6 CGM is a reliable tool and improves glucose control . The study enrolled 262 patients.

What I liked about it

These alarms can be useful, especially if you have issues with hypos while sleeping.  Not essential for me at this stage but if I was a parent of a kid with T1D then I’d favour this function.

I didn’t like the shape and the size of the Dexcom G6. I found it to be a little too bulky especially compared to the Libre and generally the aesthetics of the Dexcom G6 were not my preference.  I also understand that the G6 is more expensive than the Freestyle Libre and this does influence my preferences.  I found that the Dexcom G6 was not quite as accurate as the Freestyle Libre although this is not consistent with other users so may just be a one-off result.

The G6 felt larger than I expected and got caught on my shirt more than the Libre does. Again this may have been due to the newness of it.

The Dexcom G6 also caused me some pain. I had experienced this sort of pain with the Libre in the early days of wearing it.  It felt like nerve pain. It was uncomfortable and it stayed painful for longer than I’d expected.

What I learnt after wearing Dexcom G6

What I learnt after this experience was that it’s hard to make comparisons for medical devices such as  Freestyle Libre vs Dexcom G6.  When I had been wearing the Freestyle Libre for more time.  This caused a bias in my viewpoint but I was always aware that this bias existed.  So really my conclusions need to be taken with a Grain of salt.

I also learnt that aesthetics are important when wearing a device on my skin. And the smaller slicker option is my preference and that whilst the Dexcom G6 does offer alerts, and this can be helpful, my preference is to go with the Freestyle Libre.

Also, if you want to prolong the lifetime of you sensor you should wear it with Dexcom covers comfortable to wear. Note: Patches created by Not Just a Patch don’t irritate your skin. 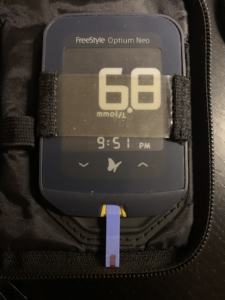 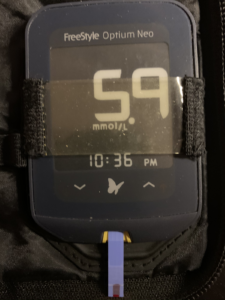 All about Freestyle Libre

The Freestyle Libre, also known as a flash glucose monitoring system, is not technically a CGM, but operates in a similar fashion.

A flash system is made up of:

Sensors usually last for 14 days and they are waterproof in up to 1meter for 30 minutes. When using adhesive stickers for Freestyle Libre the lifetime of the sensor will be improved for more than 10 days.

Unlike a CGM system, flash does not have an alarm for hypo or hyper warnings.

With a CGM, your sugar levels are always visible on the screen of your receiver. With flash, you use the reader to scan the sensor when you want to see your levels. 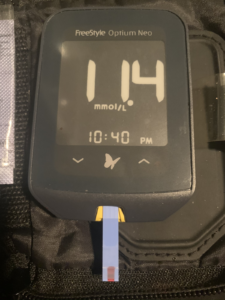 * sharing my glucose readings is somewhat sensitive…I’m far from a perfect T1D!

What I liked at this CGM

I’ve been wearing the Freestyle Libre for several years now. Therefore I have very much experience with it and some of the things that I like are it’s low profile. It’s more aesthetically pleasing to me.  It allows scanning multiple times per day and overall has improved my diabetes management and my hba1c.

What I didn’t liked at it

It would be nice for the Libre to have alert options and I believe that the upcoming Libre 2 does offer alert options.  Other than that, I can’t fault the Freestyle Libre although there are several people out there who do complain about the adhesive.

In my opinion the adhesive holds up well as well as you can expect a device like this stuck on your skin while you’re going about your daily activities. I think the manufacturer did a good job in making these so that they stick fairly well.

What I learnt after wearing Freestyle Libre

The greatest thing in my opinion about these devices is the power of information that they provide in a sense. It’s micro information that allows us to keep a constant eye on the movement of our blood glucose levels and this micro information gives us more power and allows us to react more quickly to changes in our blood glucose movement. These micro changes overtime add up to an overall improvement in health and hba1c and various other markers of diabetes management.

Which is better: Dexcom G6 or Freestyle Libre?

This will be somewhat dependent on your preferences and approaches to diabetes management. For me, when thinking at dexcom vs libre, the Freestyle Libre is the preferred device when put head-to-head. Why? Because the Libre also won out on ease of wearing.  It was less obtrusive and stayed on better than the G6.

Which is cheaper: Dexcom or Freestyle Libre?

This is an advantage for the Freestyle Libre which cost approximately $200 per month whereas the Dexcom G6 currently costs around $300 per month.  Dexcom Claim that they have better accuracy. However this was not my experience and therefore I can’t justify the extra $100 per month.