You know the feeling. You prick your finger to check your blood glucose and everything is alright. Good number. But five minutes later you feel dizzy, tired, and well, low. But like five minutes ago you were fine. Are you going to check again or not?

Hi pretty patchers! I am Talitha, 23 years old and I have diabetes for 5 years now. The situation I described was a common problem for me before I got the Freestyle Libre. I used to check my blood glucose with a finger prick for 4.5 years. So when the Libre was finally reimbursed by insurance, I was crying from happiness. It was a step forward.

A step forward, but not the last step. Libre made my life with diabetes much easier and it solved a lot of problems, but not all of them. One of them is the nights. I always have been a bad sleeper, but when diabetes came, it made it even worse. I didn’t dare to sleep with 5.5 mmol/l (100 mg/dl) or I rose enormously without realizing it. And that’s how I came up to build my own CGM. 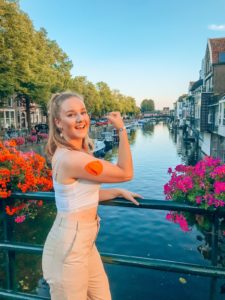 Build your own CGM with MiaoMiao

Build your own CGM? Yes, my dear. If you use the Freestyle Libre and you would love to have a CGM, you can create it with the MiaoMiao.

The MiaoMiao is a smart reader for your Libre. You adjust it at your Libre and it reads all your Libre data, without you having to check. It sends the data non-stop to an app on your phone, which creates the ability to set alarms. Yaay! Don’t worry anymore about getting low or high without noticing. The MiaoMiao is not an official medical device like the Libre or your insulin pump. But don’t worry, it’s also not necessary, since it’s only a data transmitter. You can use the MiaoMiao if you have the Freestyle Libre 1 and a smartphone. That’s all!

There are two MiaoMiao’s available, 1 and 2. The first one goes half over your Libre and mostly under. It’s waterproof and goes mostly 4 weeks without charging. It costs $99.00. MiaoMiao 2 has a better shape, goes only 2 weeks without charging, and costs $169.00. If you want to know specific differences between the MiaoMiao 1 & 2, let me know. I tried them both. You can swim, shower, and do whatever you like with both MiaoMiaos. Want to know more about the differences between the MiaoMiao 1 & 2? Let us know, write to NJAP and we will explain you everything.

How to connect your MiaoMiao

Connecting your MiaoMiao with your Libre is done within a second. Activate the MiaoMiao by pushing a pin into a little hole or connect it for a moment with the charger. Activated! Then use the stickers to stick it on to your Libre. Add the Not Just A Patch to keep everything in place. Turn on the Bluetooth on your Phone and connect with MiaoMiao. The next step is to go to the app from MiaoMiao (it’s called Tomato) and go to ‘My devices’. Tap ‘connect’ and it will make a connection. Easy! Let the CGM life begin 😉

The first time I used MiaoMiao I was so happy. But that happiness didn’t last long. Only 15 minutes after adjusting, I bumped again a table, my MiaoMiao got caught and ripped off both my MiaoMiao and Libre. So sad, because I don’t just get a new Libre from the insurance.

The next time I tried the MiaoMiao with Libre, exactly the same thing happened.

How stupid! Time to protect them and let them stick. I tried different ways. I started with wound film, but that became dirty after some days and left a lot of mess at my Libre. I also tried Skintac, you know, the glue for your skin. Oh, how I hate that stuff. It does the job, but it does it too well. I can hardly get the Libre off my skin and my skin looks horrible!

Really Not Just a Patch

But then I came across Not Just A Patch. I literally thought: whatever, another patch. But I got triggered by ‘doesn’t stick to your CGM’. Like how on earth is that possible? The wound film always left a sticky mess at my Libre. Ok, why not just give it a try?

So I did. I tried it and oh my goodness, now I understand it. It really is not just a patch. It’s perfect! The shape is designed for my gadgets, it sticks to my skin, has super nice colors, and doesn’t stick to my Libre and MiaoMiao. Now there is no way my MiaoMiao or Libre can get off my skin before I want to without irritating my skin a single bit.

So now you can always see me walking with a pink patch on my arm. My favorite patch and my favorite color to wear. I would love to see you wearing your favorite color. So go and find me at @stayhappy.nl at Instagram. Also message me if you have any questions about the MiaoMiao, Libre or patches from Not Just a Patch. 🙂

Greetings from the Netherlands!

Screenshots from the Libre app and Tomato app 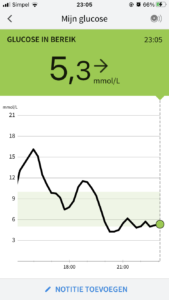 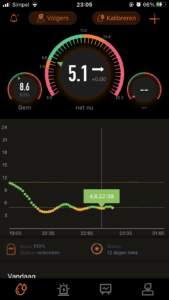 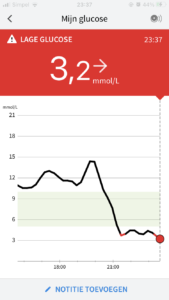 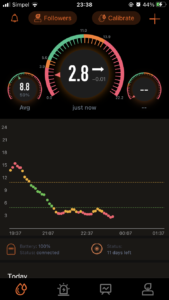